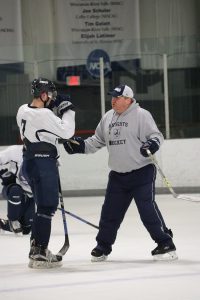 Coach Kowal is a native of Anchorage, Alaska. Kowal is entering his seventh season with the WBS Knights. Tom grew up playing AAA hockey in Anchorage, Alaska and went on to play junior hockey for the Omaha Lancers (USHL) and Division I college hockey at both the University of Alaska-Anchorage (WCHA) and the University of Nebraska-Omaha (CCHA). After college, Tom entered coaching as an assistant coach in the USHL with Omaha Lancers and the Tri-City Storm. He then moved to the NAHL where he spent time coaching as an assistant coach for the Youngstown Phantoms. Coach Kowal helped lead the WBS Jr. Knights U16 American team to an AYHL Championship and the Junior A team to a AJHL President Cup Championship. 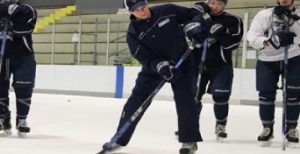 Coach Whiteside enters his third full season as the WBS Knights NAHL team’s assistant coach. Whiteside’s responsibilities include recruiting coordinator, coaching the Knights defenseman, assisting in the planning & running of practices, penalty kill, and video analysis. Whiteside is the current USA Select Development Coach and WBS Director of Scouting. Before Wilkes-Barre/Scranton, Whiteside spent time as an assistant coach with the Kenai River Brown Bears in the NAHL. He was also selected to serve as video coach for USA Hockey in the 2013 Boys Select U17 Five Nations Tournament that won gold in Trnava, Slovakia. In the summers, Whiteside serves on the coaching staff for USA Hockey’s Atlantic District Player Development Program – comprised of the best youth & junior hockey players in the New Jersey, Delaware and Greater-Philadelphia area. A Native of Philadelphia, PA, Whiteside earned his bachelor’s degree in 2015 from Niagara University in Sports Management, where he was a 4-year letter winner serving on the NCAA Division I Men’s Hockey coaching staff; breaking down game film, compiling game analysis & teaching tapes for player/coach review and assisting with practice. 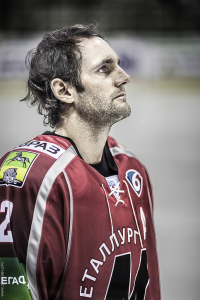 Coach Giroux is a Canadian ice hockey defenceman that played with Metallurg Novokuznetsk of the Kontinental Hockey League (KHL). Giroux, who shoots left, played collegiately at Yale University. During the 1997–98 season, he captained the best team in school history as Yale won their first ECAC regular season title (Yale has since won another regular season title in the 2008-09 season) and advanced to the NCAA tournament after only having been picked to finish in 10th place at the beginning of the season. In addition to being a 1st-team All American, Giroux was named ECAC Player of the Year as well as the league’s best offensive defenceman and was one of ten finalists for the Hobey Baker Memorial Award, given annually to the nation’s top collegiate player. Giroux spent time in many NHL organizations before leaving the US to play overseas. He has played in the AHL for the Bridgeport Sound Tigers and in the NHL for both the New York Islanders and the New Jersey Devils. Playing for Ak Bars he became Russian champion (2005/06) and IIHF European Champions Cup winner (2007). Giroux made his Kontinental Hockey League (KHL) debut playing with SKA Saint Petersburg during the inaugural 2008–09 KHL season. He participated in 2009 Kontinental Hockey League All-Star Game.

As the first Romanian to play professional hockey in North America, Mihály began playing in the United States at the age of 17 after having been offered a scholarship to Wyoming Seminary Preparatory School in Kingston, PA. Mihaly player in both the American Hockey League and the ECHL for most of his career before he choose to return to Europe in 2007. In 2008, Mihaly returned to his native country to play for the local team of HC Miercurea-Ciuc (HC Csíkszereda). He finished his 2018-2019 season as the Captain of RHL ASC Corona Brasov. Despite being arguably the best Romanian player actually active, Mihály never played for the Romanian National Team. Mihaly has played for the following teams: Sioux City Musketeers (USHL), Philadelphia Phantoms (AHL), New Haven Knights (UHL), Mohawk Valley Prowlers (UHL), Wheeling Nailers (ECHL), Binghamton Senators (AHL), Wilkes-Barre/Scranton Penguins (AHL), Milwaukee Admirals (AHL) ,Reading Royals (ECHL), Las Vegas Wranglers (ECHL), HC Bolzano (Serie A), HC Csíkszereda (HUN-1 and ROM-1).